NCDOT pushes ahead with restructuring, staff reductions despite House objections 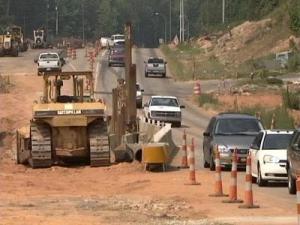 Raleigh, N.C. — The state Department of Transportation is pushing ahead with a plan that would reduce the number of state workers overseeing road building despite a state House budget provision ordering the agency to put any such plan on hold until early next year.

“We’re not going to put up with it,” said Rep. Gary Pendleton, R-Wake, who authored the House budget amendment.Pendleton said he has called Transportation Secretary Nick Tennyson and spoken with Gov. Pat McCrory’s office to express his displeasure.

Senior DOT officials outlined a proposed restructuring plan for lawmakers earlier this spring. In general, the department wants to move more positions out of the central office in Raleigh into regional divisions. Long term, the plan would also outsource much of the oversight work done in the central office. That plan roughly tracks with instructions in prior budgets to reduce staffing in the department.

While House lawmakers have said they want to put the brakes on the restructuring plan, senators have been much more keen on seeing the department make position cuts called for in prior year budgets.

“We’re fine with the DOT’s position of moving forward,” Sen. Wesley Meredith, R-Cumberland, said Wednesday afternoon. “This is direction we’ve given them in past budgets.”An email sent to many DOT workers on Tuesday explained that the department was pushing ahead with its “Reorganization Through Reduction (RTR) Plan. For those of you who aren’t clear on what this is, it is the first step in the process for eliminating filled positions.” Among the first positions to be eliminated would be “39 filled positions from the Materials and Tests Unit which includes the former Pavement Management Unit.”

According to the email, the RTR would be, at least initially, voluntary and encouraged employees who wanted to partake to attend a May 31 meeting. This initial move would be part of a three-step restructuring plan.

Crystal Feldman, a spokeswoman for the department, responded to questions about the restructuring with a one-line email saying, “NCDOT is following the law by finding efficiencies to improve project delivery.”

House lawmakers said they moved to put the restructuring on hold because they were unsure whether it would actually save any money.

“We need to see some financial proof that it makes financial sense,” said Rep.John Torbett, R-Gaston, a chairman of the House Transportation Committee.Asked about the DOT pushing forward with restructuring, Torbett said he wanted to know more.