Each urbanized area in the United States with a population of 50,000 or more is required by the federal government to have a metropolitan planning organization.  The MPO discusses and votes on multi-modal transportation issues of region-wide significance, and decides which local transportation projects should be implemented.

When I researched this topic for a presentation at the Pavement Preservation Expert Task Group meeting in 2010, there were 382 MPOs in the United States, including 52 representing regions with populations of more than one million people. As you might imagine, most of these urbanized regions have substantial investments in roadway networks.

As an example, the Metropolitan Transportation Commission (MTC) in the San Francisco Bay area of California represents 7.1 million people and 42,000 lane-miles of roadways, including 1,500 miles of highways. The replacement value of its transportation assets has been estimated at between $40 billion and $50 billion.

The MTC has certified data collection companies to assure consistently good data, and with the uniform data analysis package in Street Saver, every jurisdiction’s roads are evaluated and transparently compared on an apples-to-apples basis. As a result of good data and analysis, the MTC sets preservation goals for each local agency to accomplish, and it ties a portion of its funding distribution to the successful completion of those goals. The MTC has a model program that should be emulated by other MPOs across the nation. 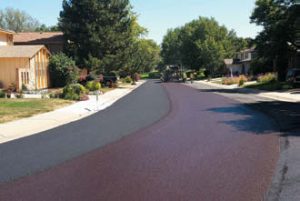 In 2015, single application of Type II slurry
surfacing is placed in City of Westminster,
Colo., Program by contractor A-One Chipseal

DENVER AREA FIGHTS ‘WORST FIRST’
In the Denver area, we have a long way to go. In the early 1990s as the Pavement Management Engineer for the City of Aurora, Colo., I helped organize a group called the Metropolitan Government Pavement Engineer’s Council (MGPEC). The group has met monthly for more than 20 years, and has developed a series of standards and pavement design and construction specifications that are useful to local agencies throughout our region.

It is interesting to note that the local agencies in the Denver area use more asphalt than does the Colorado DOT statewide. As the needs of the local roadways are different than the needs of the more heavily trafficked state routes, it is not surprising that there are some differences in the specifications.

Last year, Mike Skinner, now director of pavement engineering for the Colorado Asphalt Pavement Association, and I requested the formation of a Transportation Asset Management Task Force by the MGPEC, and we were appointed as co-chairs. One of the primary goals of our task force is to assist our
MPO—the Denver Regional Council of Governments (DRCOG)—with the implementation of asset management programs by the 54 local agencies in the Denver-metropolitan region and by DRCOG.

As our task force reviewed the criteria for project selection utilizing the federal funding that passes through DRCOG, we discovered a written worst-first selection process. Projects that are funded must score lower than a “40” in a very limited pavement evaluation computer program.

Last fall we met with the staff at DRCOG to share MGPEC’s concern about this worst-first criteria and its impact on their transportation asset management program. We explained that the MAP-21 performance goals will not be satisfied without an emphasis on pavement preservation.  We will be meeting with the Technical Advisory Committee at DRCOG this year, working to implement a pavement preservation philosophy throughout the coming year in the Denver region.

I want to encourage my friends and colleagues in the preservation community to examine the funding criteria for pavement projects that are used by the MPOs in their areas.  Getting the MPOs to incorporate pavement preservation funding can be a key for local agencies improving their management of our transportation assets. Everyone wants good roads, but areas that have worst-first funding criteria will never have them.