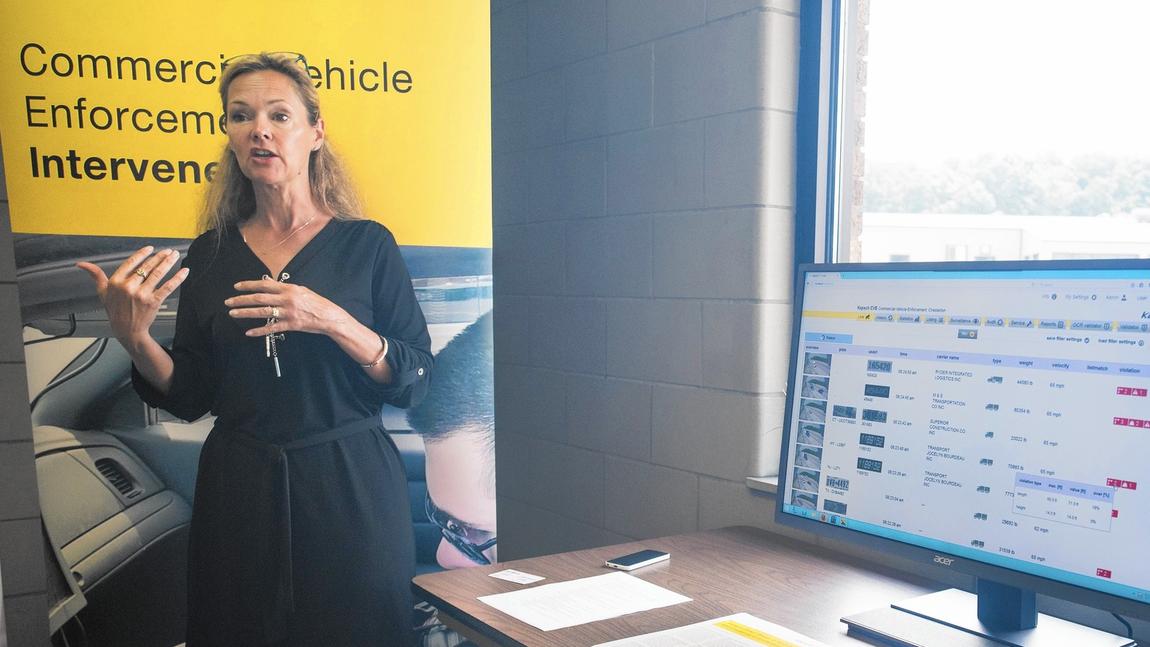 Lauri Brady, with Kapsch, speaks about Indiana’s Direct Weigh In Motion and Credential Enforcement Pilot Program on Friday while a live demonstration of the system runs on a computer nearby.

They don’t realize it yet, but the trucks whizzing past the Indiana State Police weigh station on eastbound Interstate 94 are participating in a technology tryout.

A recently launched pilot program there “could be a game-changer for highway safety and preservation across the nation,” said Brandye Hendrickson, commissioner of the Indiana Department of Transportation.

Cameras mounted at an overpass just west of the weigh station, between Chesterton and Michigan City, take pictures of the trucks’ license plates and identification numbers. The trucks’ weight, length and width are captured by sensors embedded in the highway.

The state police weigh station collects that information, too, but only when it’s open and staffed.

The technology being tried out on I-94 gathers data around the clock.

The Direct Weigh In Motion and Credential Enforcement Pilot Program – the first of its kind in the United States, company spokeswoman Lauri Brady said — is funded by Kapsch TrafficCom, the Austria-based company that made the equipment.

“We want to make sure we do everything right,” Brady said.

Similar Kapsch systems are being used on highways in the Czech Republic and France, she said.

Kim Judge, administrator of the state police truck enforcement program, said Purdue University researchers will evaluate the equipment’s accuracy and effectiveness by this fall, and that will determine whether the state moves forward with the Kapsch program.

“We have an obligation to explore the possibilities and see where it takes us,” Judge said.

State police can’t write tickets for overweight trucks from the Kapsch data, Brady said, because state law requires a truck’s official weight to be determined by a scale. That law would have to be amended if the new technology were to be used in enforcement of truck weight limits.

The equipment also could increase the state’s revenue by finding trucks that haven’t updated their registrations. A Kapsch study last year on Interstate 70 near Richmond, Ind., found 5,500 truck credential violations in a month – a potential for thousands of dollars in fines.

“With this, we would be able to capture that information 24-7,” said James Poe, deputy commissioner of the Indiana Department of Revenue.

“We absolutely support this pilot (program),” he said.

Judge said the Kapsch system, if adopted, would supplement — not replace — the existing state police truck enforcement program. The staffed weigh stations are needed because trucks pulled over for weight or registration violations also might have safety issues – bad brakes, for example, or an improperly secured load. An inspection could range from an examination of the truck’s undercarriage to a look at the driver’s log book and driving record.

Brady added that the automated system could be used on nearby state highways that truckers use to avoid the weigh stations on interstate highways. “We expect this to expand the footprint of weight enforcement,” she said.

Hendrickson noted that overweight trucks increase road damage and shorten the expected lifetime of highways. She said Indiana is looking for new technology to improve enforcement because of a large expected increase in truck volume.