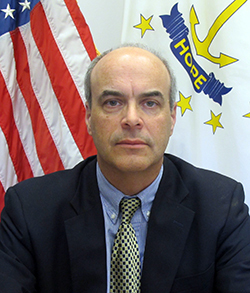 PITTSBURGH – The American Association of State Highway and Transportation Officials Board of Directors voted Monday, at its annual meeting in Pittsburgh, to elect Rhode Island Transportation Director Michael Lewis as the association’s president for the next year. Mike Hancock, Secretary of the Kentucky Transportation Cabinet, was elected AASHTO vice president.

As president, Lewis will emphasize three areas: the deployment of new technologies, the implementation of reforms included in Moving Ahead for Progress in the 21st Century Act (MAP-21), and leading AASHTO’s effort to pass the next surface transportation reauthorization bill.

“My goals are to build on the momentum we experienced under the leadership of immediate past President Kirk Steudle and successfully help transition the organization under its new executive leadership,” said Lewis. “I will continue Kirk’s efforts to push for the speedy implementation of new technologies and innovative programs that are streamlining project delivery and cutting costs. I also plan to simultaneously work on the implementation MAP-21 reforms while providing input to lawmakers on the next surface transportation bill.”

Lewis has led the Rhode Island Department of Transportation since March 2008. He has advanced a public information campaign to educate the citizens and key decision-makers about the challenges of transportation funding. To this end, Rhode Island Governor Lincoln Chafee introduced critical reforms that were passed to direct more revenue to transportation. For the first time in decades, Rhode Island will not have to seek voter approval for a transportation bond to serve as the state’s match for federal funds. Lewis also has been instrumental in the expansion of commuter rail operations in Rhode Island. Under his leadership, Rhode Island has opened two new commuter rail stations to provide opportunities for commuters and to bolster the state’s economic development efforts.

Lewis was an engineer with the Massachusetts Highway Department and then the Massachusetts Turnpike Authority from 1984 to 2007. From April 2000 through project completion in December 2007, he was Director of Boston’s Central Artery/Third Harbor Tunnel Project (the Big Dig).

Lewis was a recipient of the “Move Massachusetts” 2000 Special Engineering Achievement Award and the National Engineers Week-Boston: New England Achievement Award. In 2006, he was the recipient of the Boston Engineering Center Leadership Award, and in 2010 he was awarded the Transportation Leadership Award by the New England Section of The Institute of Transportation Engineers. Lewis is a member of the American Society of Civil Engineers and the Boston Society of Civil Engineers.

Lewis graduated with a Bachelor’s of Science degree in Civil Engineering from the University of Vermont.

He recently served as president of the Southeastern Association of State Highway and Transportation Officials (SASHTO) and currently serves as Chairman of the AASHTO Standing Committee on Planning and as a member of the Executive Committee of the Transportation Research Board, a national panel that guides transportation research in the United States.

Having been responsible for preparation of the Kentucky Highway Plan for many years, Hancock has worked closely with local, state, and national leaders in the area of project needs prioritization and transportation program funding issues.

He is a native of Princeton, in Caldwell County, and a graduate of the University of Kentucky.